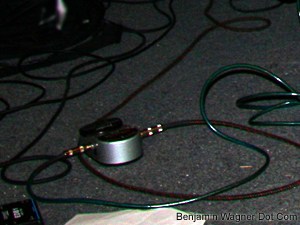 Magic Mountain Ski Resort near Londonberry, Vermont, is — if my pal, singer/songwriter Chris Abad’s description is correct — “the slacker’s Okemo.”

Chris and his wife, Megan, invited Abbi and I to join them there next weekend.

It took Abbi and me about three seconds of discussion.

An idea occurred to me the next morning. I emailed Chris on my Blackberry as I walked to work.

Here’s one for ya. We bring our guitars to VT. I bring ProTools + mic. On Sat PM we play/record a short set for everyone, then roll out mp3s on our respective blog/MySpace properties. Think of it is any easy way to remind our respective/collective audiences that we exist. :) Only downside is a) we need to rehearse a tiny bit b) our wives think we’re nerds (but I imagine they think that anyhow). Whaddyathink?

His response was succinct, and enthusiastic.

And so Chris and I spent a few hours running songs at his rehearsal space yesterday afternoon. It’s a cold, dingy room on the eighth floor of a building full of cold, dingy rooms on Eight Avenue just below The Port Authority.

I played him the ten songs I expect to put on my forthcoming CD which: “Giving Up The Ghost,” “Promise,” “(I Won’t Let You) Get Away From Me,” “Breathe In.” Taken as a whole, the constitute a solid bunch of songs. With Chris playing and singing on them, everything sound better, and looks brighter.

A few of those songs are going to pop up on this EP — this, “Magic Mountain EP” — which Chris and I will premiere on our respective sites during the week of March 3.

Here’s the wrinkle (to reward the few of you who’ve made it this far into the post): We’re leaving one of the songs selections up to you! Tell me what you want to hear Chris and I play in the comments, and we’ll do so with the most popular.