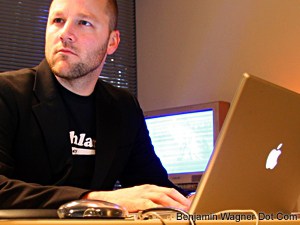 Ok, so we’ve almost made it through Colossal Televised Event season. I live blogged Super Bowl XLII three weeks ago, and the Grammy Awards two weeks ago. Tonight: The Academy Awards.

7:53 – My head literally explodes as Tim Kash — who’s been navigating the Oscar Red Carpet minefield for nearly an hour straight on MTV.com — is handed Sumner Redstone, the venerable head of our little media conglomerate. I see my career flash in front of me as our scrappy little punk rock production is suddenly front-and-center with the Chairman of the Board. And then, like some editorial transition from Venus, we go to Horowitz’s Oscar montage from Hell.

8:20 – I switch to ABC. Regis is doing some user generated thing. He’s talking to some metal-mouthed teenager from Pasadena when I’d rather see him talking to Angelina Jolie — or at least Ellen Page. Damn you Internet!

8:31 – The open is a CGI Schwarzenegger delivering an armored truck full of Oscar statuettes through general LA chaos, including (but not limited to): King Kong, T-Rex, Transformers, and Jimmy Stewart dodging a crop duster. Kinda’ creepy, but entertaining.

8:51 – Jon Stewart makes a joke about watching “Lawrence of Arabia” on an iPhone. Seems like an oddly out-of-time poke (though good for appeasing theater owners).

8:52 – When I was a kid, I though these awards shows were actually about acknowledging excellence. When Steve Carell walks out with Anne Hathaway to the “Maxwell Smart” theme, though, I am reminded it about one thing: boosterism.

8:56 – Katherine Heigl says, “Please excuse me; I’m terribly nervous and I’m not very good at this.” And I actually go, “Aaaaaaw.” What’s more, I mean it.

9:06 – Thirty-six minutes in and already I don’t care. Booooo-ring.

9:22 – “For those of you waiting for a moment, Javier Bardem’s was one.” That Jon Stewart (who I love, for the record) has to point this out is, um, troubling.

9:25 – One hour in, and I’m four for six in the Oscar pool (missed Art Direction and Visual Affects). Not bad.

9:40 – These Oscar flashback segments — like the Grammy 50th Anniversary ones a few weeks ago — just serve to bore the olds, and alienate the kids. Lame.

9:41 – Man, JC Penney has one hell of a music supervisor. John Prine’s “Killing The Blue” in a commercial for jeans? Gorgeous. “Somebody said they saw me / Swinging the world by the tail / Bouncing over a white cloud / Killing the blues.” Best part of the Oscars so far (until the logo reveal, anyway).

10:05 – That Seth Rogan and Jonah Hill are presenting is kind of mind-boggling awesome.

10:15 – Bertolli uses The Oscars to launch its user-generated “Bertolli Nights In” (“Have you ever dreampt of seeing your life on the big screen? Send us you a video with your ingredients for a romantic night in, and of course include Bertolli frozen dinners. Your story could be coming soon to a theater near you!”) ad campaign whose kicker is a beastiality joke. Nice. At what point will the world’s audiences rebel and say, “Yunno what? We want YOU to make TV, commercials and movies, not us!!!”

10:48 – Travolta’s hair is just SHOCKING. It looks like astroturf. “It’s my favorite category because” — and here I think he’s gonna’ say something about “Grease” or “Hairspray” — “a song can lift spirits, and move your heart.” Barf.

10:50 – Wow! “Once” wins! That’s, like, the only cool thing that’s ever happened at the Oscars! After all those awful, saccharine Disney songs, a genuinely beautiful and modest song wins something. “Make art!” Indeed.

10:52 – Spielberg characterizes the feeling of winning an Oscar as “Male menopause.” Genius.

10:56 – My boss just walked into my office. “Congratulations. The Oscars.” Now all I need is the Harp at O’Lunney’s to make it official.

10:57 – Wow AGAIN!!! When do they EVER bring someone out to take a second crack at their acceptance speech!?! The feel-good story of the year, for sure.

11:02 – The Dead Pool. Which deceased star drove the most applause? Shamelessly, producers left Heath Ledger for last. So when applause in the Kodak Theater crescendoed, it was difficult to tell if it was for Heath, or collective relief that that awkward, painful segment was over.

11:15 – How hilarious will it be when the producer’s (again, shameless) Iraq soldier-hosted segment awards a Documentary Oscar to “No End In Sight”?

11:16 – Or when Tom Hanks awards it to “Taxi To The Dark Side” immediately after the producer’s (still shameless) Iraq soldier-hosted segment.

11:41 – Every time they show that clip of James Cameron yelling, “I’m the king of the world!” I think, ‘What a douche bag.’ I imagine I’m not alone in that thought.

11:42 – Can you tell that the TV over my shoulder gets really crappy reception? Or that I’m wearing a tux (jacket anyway)?

12:05 – I email my acceptance speech: “I’d like to thank my wife, Abbigail, without whom this would just be hardware.”