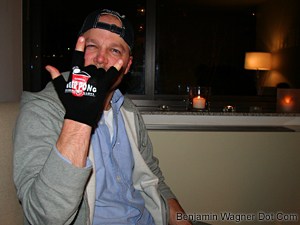 I’m not sure which was the most prescient harbinger: Pedro’s trio of sixes (diamonds, clubs, spades), or my beer pong glove.

With just thirty-six hours off from work, the original idea — taking in one of the three Best Picture nominees we haven’t seen — is losing traction.

“Let’s skip the movie and do the margarita/guacamole thing.”

I’ve donned my beer pong glove. Pedro’s pulled his sixes. Pembry’s taken three rounds in a row. And Abbi’s fallen off her chair.

I wake up alone on the couch. The television is off. The living room is dark. An empty pint of Häagen-Dazs rests in my lap.

Looks like another Sunday morning punctuated by lime-flavored burps.