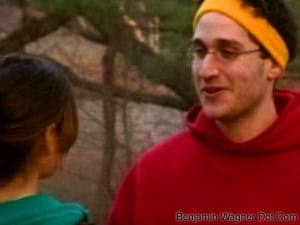 Our movies coverage was an outgrowth of our news.

Chris Connelly’s “The Big Picture” had long since established MTV News’ presence in the movies space on television in the late ’90s, as MTVNews.com was hitting a stride in strict music coverage, it lacked representation online. During that time, my colleague, Robert Mancini, and I were spending out brief lunchtime trolling the Internet for trailers. At some point, we turned to our boss and said, “We should start doing movie news.”

It grew from there.

The site’s been relaunched numerous times since its first incarnation in 2000 (or so). We premiered the wildly-successful MTV Movies Blog last spring, and are soon to launch a brand-new version. We cover all the big events, from Sundance to ComicCon to the Golden Globes. Until Sunday, though, we’d never been the Oscars.

A few months ago, I asked an esteemed colleague what he thought the odds were that the Academy would welcome us.

“It’s been years since we’ve been there on air,” he said. “And these days, you have to broadcast live from the carpet.”

“What if we were live on the Internet?” I asked.

There’s more to the story, including Integrated Marketing pitches, and some real hustle on a whole bunch of people’s parts. In short, the Academy said yes. And we’re going to be live on MTV.com Sunday night from 7-8pm, then on-demand thereafter.

We’ve done a ton of stuff this week in an effort to create some excitement on behalf of our coverage. The following video, though, takes the cake. Enjoy. And see you Sunday night!