Hide & Seek: A Consideration Of REM & U2 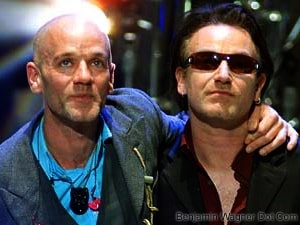 In the fall of 1987, two scrappy rock bands stood poised for world domination.

REM’s fifth release, “Document,” catapulted the band from college rock staples to mainstream mainstays. The band’s Top 10 hit, “The One I Love,” cracked the top ten. The album went platinum, paving the way for a five-album, $80M Warner Bros. deal.

U2’s fifth studio album, “The Joshua Tree,” was a cultural phenomena. Its two number one singles (“With or Without Your” and “I Still Haven’t Found What I’m Looking For”) drove over 10 million sales, securing the band the cover of Time Magazine and, later, two Grammy Awards.

I was a sophomore in high school that year. Music was everything. Both cassettes were in heavy auto-reverse rotation on the tape deck of my ’79 Volkswagen Rabbit. And both informed my sense of what constitutes a pop song: meaningful, propulsive, compulsive, and hook-filled.

Moreover, though, I wanted to be both singers: Bono, and Michael Stipe.

Twenty years later, U2 has made good on the promise of its youth. From the genre-busting Achtung Baby to the of-the-moment All That You Can’t Leave Behind, the band has continued to shatter expectations, break records, and remain one of the world’s best, most-massive rock bands.

REM, though, has faltered. Its drummer, Bill Berry, departed the band in 1997, leaving the the remaining trio apparently aimless. All of of the band’s subsequent releases — Up, Reveal, and Around The Sun — left critics and fans alike alienated.

While membership is certainly a factor, the key, I think, to the discrepancy between the degree of each band’s success comes down to a childhood game: hike and seek.

Both bands are preparing 2008 releases. REM leads with its April 1 release, Accelerate. U2 is reported to follow in October with an as-of-yet untitled CD. REM’s new single, “Supernatural Superserious” hit iTunes last week.

“Everybody here,” Michael sings, “Comes from somewhere that they would just as soon forget or disguise.”

The lyric is Michael Stipe in a nutshell: exhibition is shamed, mainstream is shunned, and the place from which we derive is best left behind. Here he is skinny dipping in the dark in “Nightswimming.” Here is clad in cloaked ambition (“No one can see you try”) in “Imitation Of Life.” Here he is withholding (“I will hold all my breath until these shiver subside”) in “Try Not To Breathe.” Here he is “Leaving New York” (“It’s easier to leave than to be left behind”). Literally and figuratively, he is hidden behind obscure, oblique, indecipherable lyrics.

Bono, in contrast, cannot aspire, endeavor or be clear enough. High (“Vertigo”) or low (“The Playboy Mansion”), his heart is on his sleeve, his cards are on the table. He’s “Lookin’ for the baby Jesus under the trash.” He understands prostration, that, “If you wanna’ kiss the sky you’d better learn how to kneel.” He seeks light (“Ultraviolet (Light My Way)”), love (“Do You Feel Loved”), and levity (“The Sweetest Thing”).

And consider their respective heroes. REM: Patti Smith, The Velvet Underground, and Television. And U2: The Beatles, The Who, and The Clash.

It’s persecution (“Call me leper king”) versus absolution (“packing a suitcase for a place none of us has been/A place that has to be believed to be seen”), a transient adolescence (Michale was an “army brat”) versus a well-rooted youth. It’s “Maybe we shouldn’t” versus “Yes we can.” It’s a come-from, a world view, a raison d’être.

It took me until last week — running down Ninth Avenue with my iPod at full tilt — to begin to get at something that’s been in front of my eyes (or, blaring in my ears) for twenty years. Hide? Or seek? Obscurity? Or clarity? Closed? Or open? Maybe? Or yes?

I love both bands, and always will; they’re the soundtrack to my life. As such, I will probably always buy their records, and see their shows. Moreover, I value gray area they collective provide: the intersection of dark and light, unconscious and conscious, dreams and reality.

But it occurs to me that one can die only one of two ways. So what’s it going to be? Hide? Or seek?