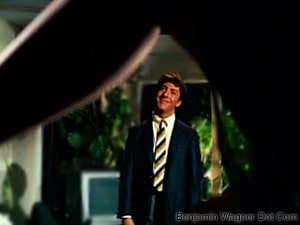 There’s a great article in Vanity Fair’s Hollywood Issue on the making of one of my all-time favorite film’s, The Graduate.

Of course, the film, released in 1967, somehow captured the zeitgeist of the late ’60s, especially the generation gap between parents weened on Eisenhower-era prosperity and optimism, and their increasingly disillusioned kids; Kennedy had been assassinated, MLK, RFK would soon follow, and Vietnam and Nixon were all just getting good (which is to say, bad).

And of course, the film, an adaptation of Charles Webb’s novel penned by Buck Henry and directed by Mike Nichols, is hilarious. Whether laughing at Dustin Hoffman’s awkward Benjamin, Norman Fell’s suspicious landlord (“You aren’t one of those agitators, are you?”), or Richard Dryfuss’ uptight flatmate (“Want me to call the cops?”), we’re always aware of a certain darkness. Something is always amiss.

What always appealed to me about the film, though, is how uncomfortable, unmotivated, and uncertain Benjamin feels. From the first frame to the last, Hoffman seems out of place — and keenly aware of it.

Nichols, it ends up, hired Hoffman for his ability to manifest this outsider status. In the Southern Californian landscape of blond-haired, blue-eyed suburbanites that Webb had constructed (or, more likely, reflected), Hoffman’s brooding ethnicity had to be a red herring.

“I had come all the way from seeing the character as a super goy to… the dark, ungainly artist,” Nichols explains. “He couldn’t be a blond, blue-eyed person, because then why is he having trouble in the world of blond, blue-eyed people.”

There is a quality to Hoffman’s Benjamin Braddock that reminds me of another of my favorite fictional characters, Holden Caulfield. Like he tells ole’ Mr. Spencer, he feels trapped on “the other side” of life, continually attempting to find his way in a world in which he feels he doesn’t belong.

That alienation — more than his angst or sarcasm — resonated with me when I first read the novel during my sophomore year in high school. I felt a spiritual kinship to his lonesome, aimless wanderings through a cold, hostile and phony New York. High school felt the same way to me. Often times, adult life does too.

“I have a feeling that you’re riding for some kind of terrible, terrible fall… The whole arrangement’s designed for men who, at some time or other in their lives, were looking for something their own environment couldn’t supply them with… So they gave up looking.”

What’s odd, now, is just how long I’ve identified with Holden’s world view. There’s still a very real, very vocal Holden Caulfield in my head. On blustery, snowy nights, he pops his collar, hangs his head, and hides behind his stocking cap. He gets angry when a gaggle of shouting kids crowd the sidewalk, or a maitre d’ ignores him. He loathes vacuous small talk and longs for meaningful connection.

Both characters, though, are little more than teenagers. Their field of vision is narrow, their grand theories untested. They haven’t been forced to persist, to endure, to make due.

Throughout The Catcher In The Rye, Holden wonders where Central Park’s ducks go when the pond freezes. How, he wonders, do they endure constant, relentless change. Where do they go? And why do they return?

I ran past that pond, there below The Plaza, this morning. The air was cold there in the shadows of Central Park South. The pond itself was half frozen. But there they were, floating in a small pool of green water, illuminated by a shaft of sunlight that had snuck through the pesky, concrete skyline.

Apparently, it occurred to me today, they were there all along.