Less Than You Need – MP3 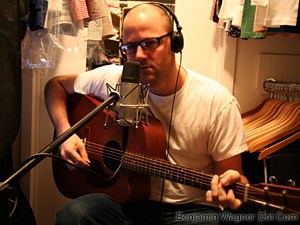 This weekend, I spent nearly eight hours on one song. This is not that song.

That song is called, “For You,” a simple crescendo in D. It began a few weeks ago as I sat and reacquainted myself with my guitar. A simple D pattern and a few lyrics emerged. And so, with some time on my hands Saturday night, I invested in the idea. By the time it was too late to keep my eyes open, I had eighteen tracks (mostly guitars, but also one suitcase standing in as a bass drum).

Sunday night, then, found me watching my new favorite show, 60 Minutes Classic on VH1 Classic (all my favorite things: rigorous reportage, and rock ‘n roll!). After an hour of Elton John interviews, I had the inspiration I needed. I walked into the bedroom with some sort of a melody and something of a rhythm in my head, then spent a few minutes finding it all on the fretboard.

It wasn’t until the section that later emerged as the chorus, though, that I thought I had something even a little bit different.

See, there are two primary criteria for what sort of thing generates excitement after twenty years of songwriting: 1) a new lyrical idea (“Haven’t you already used the word “atmosphere” Abbi asked the other night) and 2) a new musical idea (which, given my limited palette, means a new groove or new progression). It was the falsetto that excited me and made me think, “Huh, you might have something there.”

So I jammed myself into my walk-in closet turned recording studio, and began recording what I now call, “Less Than You Need.”

And what you hear here is pretty much that. The lyrics are scratch. I basically turned out the lights and started singing. In fact, I sang with such enthusiasm (at well after midnight!) that my forehead hurt at the end of the take. I’ve since gone and fleshed out the lyrics a bit more (see below). But you get the idea. Maybe you’ll hear why I got just a little bit excited.

Less Than You Need