The War Of Independence: A Family Snapshot 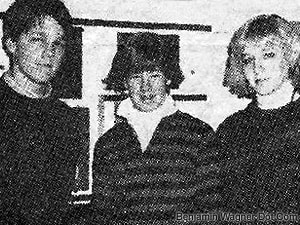 I was a sixth grader at Holmes Elementary in Oak Park, IL, when my parents divorced, and my mother moved my brother and I to Berwyn, PA. I began sixth grade at Devon Elementary there. I was eleven-years-old.

My father (who, it’s worth noting, was exactly my age now) remained in Chicago where he worked for the Environmental Protections Agency. On Friday nights, he poured himself into a deep cerulean blue Pontiac Firebird, and point east. Twelve hours and 747 miles later, he pulled into out driveway and honked his horn.

I can only imagine how difficult it was to entertain an eleven and fourteen-year-old (especially the latter, but that’s for Chris to tell you), especially in a new town so far from home, and especially given the circumstances.

Overwhelmingly, I remember spending time together in Valley Forge Park, the 3500-acre Revolutionary War encampment just down the hill from our house where George Washington and his ragged army spent a brutal winter in retreat from the looming British forces.

We spent hours watching radio control plane hobbyists take off and land from a broad, flat, grassy field on the edge of the park. The rest of the time, we hiked the short trails along Valley Stream, scrambled the scree-covered hills of Mount Misery, and wandered the historic buildings.

My father had a 35mm camera, a Canon AE1 as I recall — pretty fancy stuff in the pre-digital era. As eleven-year-olds are want to do, I pawed at it eagerly, learning a little about light, lenses, and aperture while taking some fairly rudimentary photos of the cabins, hills, and trees around us.

I don’t remember how I came to know of or enter in the Valley Forge Park Interpretive Association’s annual photo contest, but I do remember taking the winning photo. It was a sunny but cold spring afternoon. The Park was staffed with costumed volunteers. One, dressed in authentic Continental Army uniform, stood framed in the doorway of George Washington’s Headquarters, there along the Schuylkill River. No doubt spotting us approaching — an eager, excited eleven-year-old, his apathetic fourteen-year-old brother, and their mustachioed father — he snapped to attention and smiled. I raised the camera clumsily, and took a photo.

The following fall, it took first place in the the contest. Looking back now, I’m not even sure that everything unfolded as I remember. I have a sneaking suspicion that my father took a few snaps as well. Maybe his won, maybe mine did.

I’m not sure it really matters, though. Winning that little photo contest amidst that season anger, discord, and sadness was some sort of victory for all of us. Best of all, that blue ribbon was afforded an image upon whose values we could all agree: order, simplicity, and resilience amidst the ruins of a bitter, difficult war.

Twenty-five years later, I fancy myself something of a photographer. Remarkably, I find myself taking photos of flower petals and blades of grass, not too unlike my father. Moreover, those basic aesthetic rules — geometry, framing, context, depth of field — inform some portion of my day job.

When I go home to Pennsylvania, I never fail to take a long run there, often slowing as I pass that same doorway and remembering that moment when — if only for an instant — we were all winners.