With Or Without You 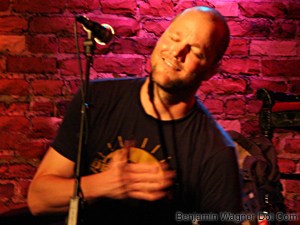 The release of “U23D” has prompted a wave of quips about how even a 70mm IMAX screen can’t hold Bono’s oversized ego.

I dragged my pal Brian to a screening on Thursday night, my second.

Once again, what struck me wasn’t its size, volume, or depth (though all remain impressive, especially in front of a screen that fills one’s entire field of vision and speakers that rattle one’s bones), but a moment — one fleeting instant — towards the end of the film.

The band is wrapping up its second encore, a rousing version of “With Or Without You” that has the the entire South American audience singing along. Bono, in close-up, looks out at the crowd and smiles unselfconsciously. Joy, gratitude, and a familiar sort of an adulatory intoxication is writ large his face.

That instant — the roar of the crowd, the twinkle in his eye — has nearly brought me to tears twice now. And I think it’s because I know what that moment feels like, and know that it’s fleeting.

After a period of significant flamboyance (that’s what a college band is for, right?) — yellow rain slickers as fashion statements, dances inspired by hamsters, Boone’s Farm in lieu of water), I mellowed a bit. The “singer/songwriter” mantle will do that to a guy. So will naming the band after yourself, and being tasked with leading it, not to mention having to play guitar and sing and lead said band.

But I’ve managed to grow a bit more theatrical over the years. I blame The Smith Family, the country cover band Kevin Anthony and I formed in 2004. Though we shared singing duties, I was, for all intents and purposes, Kevin’s sideman. Which I relished; it was nice not to sweat the spotlight. But all that time spent on strumming and singing backup vocals afforded me the long-lost opportunity to relax a bit, throw in the odd scissor kick or windmill. By the end of our run together, I’d stood on more than one barstool and led the audience in song-a-long. I’m not sure Kevin appreciated it (though he’s far too kind to have ever said anything), and I’m sure some folks thought (or, maybe still think) that even a 70mm IMAX screen couldn’t hold my oversized ego. And I’m not entriely ruling out that possibility. But I don’t think that’s it.

I recently fumbled across this post about a show I played in December, 2006.

Some might think my shenanigans are planned, practiced, or premeditated. But here’s the thing: the moment at which I may appear the most self-conscious or egocentric is actually the moment when nobody’s home; the ego has left the building. I am all instinct, all id. I am not worrying, fretting, thinking, wondering, debating, or quarreling. I’m not avoiding obstacles. I just am. The result, of course, is unbridled laughter. I am weightless. I am out of my head.

When I watch Bono, that’s what I see. I mean, that’s the whole point, isn’t it? To, as Billy Joel once sang, “Forget about life for a while?”

That’s what moves me, on stage and off. And that’s what frightens me. Because, at nearly six months into my thirty-sixth year, I know the number of times I’m going to stand up in front of a crowded room and get out of my head is diminishing. And, quite frankly, I’m not sure what I can do about it. Nothing comes close, not beer, ice cream, marathons, or even sex. (Ok, well, they come close, but not close enough.)

I think it’s important for someone to be oversized, larger than life, and bigger than the sound. It reminds us all that we can be too. It reminds us all to dance beneath the diamond sky with one hand waving free. What else is there? And why should we deride those who do so as an example? What are we afraid of?