Giving Up The Ghost 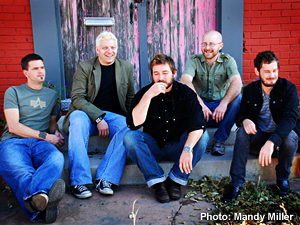 Who are these ghosts, really?

Whence we last saw The Midwest’s Favorite Sons, The Nadas, co-frontmen Mike Butterworth and Jason Walsmith and I were hanging backstage at Philadelphia’s World Cafe. The boys were seeding a new venue while road testing a few new tunes. They had shared demos for their forthcoming record with me just a few days prior. Two of the songs slated for the impending release, the previously-released “Feels Like Home” and “Goodnight Girl,” were already bona fide viral hits thanks in no small part to You Tube.

“The challenge,” I told them that night, “Is to release an album full of those.”

With “The Ghosts Inside These Halls,” they’ve done so.

It’s impossible to separate the men I know from the songs they’ve written. The two couldn’t be more different: Mike, the whispering, wailing Technicolor bleeding heart; and Jason, the eternally optimistic, day laboring everyman. Moreover, it’s difficult to separate their lives from their songs: Mike is recently divorced, while Jason recently welcomed his second son into the world. Together, these equal doses of dark and light bear out, revealing a dynamic portrait of the thirtysomething, middle American working man. Filtered through the lens of bassist Jon Lockers’ increasingly proficient Sonic Factory Studios, the band sounds more mature, more dynamic, and more hell bent on the purity of its own expression than ever before.

In other words, “The Ghosts Inside These Halls” — which became available for download on Tuesday and will be officially released March 4 — is one heck of a record.

Take the opening track, “Loser.” Sure, you think you’ve been down this road before. But don’t let Mike’s plaintive melody fool you; new drummer Ian Shepherd and Locker have a pummeling chorus in store for you. It is the sonic equivalent, I imagine, of Mike’s inner monologue. That is, when the one of the best singer/songwriters and performers I know isn’t on stage. There, were I betting, is where Mike finds himself most Zen.

Just like that, though, the band switches gear. Tearing a page from Van Halen’s “Finish What You Started” and even George Michael’s “Faith,” Walsmith transports us to the front seat of our high school jalopy, parked there at the edge of a runway on a hot summer night. Possibilities abound like fireflies.

And then Butterworth lulls us into a “Goodnight Girl,” a lush soundtrack of loss.

“I already know what I’m gonna’ to call my next record!” I wrote excitedly. “But I’m not gonna’ tell anyone ‘cuz I don’t wanna’ blow it.”

That was over two years ago.

While I’ve since performed what I imagined would become the title track to my as-of-yet phantom thirteenth (and possibly final) LP, I’ve never spoken or written about it.

Giving Up The Ghost.

I don’t remember where I heard the phrase, but it made immediately sense.

It’s a familiar refrain, really, filtered through the stained glass of another sacred, lonesome, haunted space.

Whatever it is, there’s something about holding onto the dreams of an eighteen-year-old when you’re thirty-five. Whether it’s true love, the perfect family, or the rock and roll fantasy, the passage of time takes a toll on everything one once imagined.

The ghosts, then, may well be the specter of what might have been, what never was, and what may well never, ever be.

The thing about ghosts, though, is that their power is in solitude. That is, our darkest fears manifest when we’re alone, or when we feel like we are. With The Nadas, “The Ghosts Inside These Halls,” though, we know that we aren’t, and need never be again.