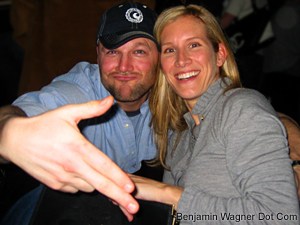 Chris and Meg invited us to a Superbowl party at The Irish Rogue. I don’t know much about football, but I sure like wings. Here are my notes from the most raucous affair.

6:15- Jordan Sparks. Fine singer. I like her well enough. Even if she’s lip synching. But the whole cut to the troops thing? C’mon. Awful. And that military flyover at the end? What are we, Soviet Russia? Is it May Day? C’mon.

6:30- Giants just scored a first down and, judging by the clamor of the patrons here at The Irish Rogue, you’d’ think they’d’ actually scored.

6:40- Giants are on the board. More importantly, though, the nachos just arrived.

6:48- I swear to God I just had the following thought (which, thankfully, I didn’t say out loud): “Football’s so rooouuugh.”

6:57- Patriots score. Silence in the bar. Except Meg, who gestures in Mike’s direction.

7:07- Patriots intercept. For all the screams, you’d’ think Godzilla’d stomped through the bar.

7:26- The line is three deep for the john. One dude steps towards the ladies room. I don’t need to go that badly.

7:37- One’s enjoyment of the Justin Timberlake Pepsi commercial appears commensurate upon ones gender.

8:34- I dunno, do you really wanna win the Super Bowl because of some random little penalty? Jeez. These are litigious times.

8:39- The e*trade ad with the baby at the computer wins Best Commercial so far…

8:40- Until the flying Bud Lite guy gets sucked into the jet engine.

8:52- “This just in! Bananas were delivered to the Patriot locker room at half time!” Um, ok.

9:00- Megan says, “Hey do you guys want to go to Yellowstone in May? It’s when all the crazy carnivores have babies.”

9:06- Giants score and the Bouncer just LIFTS PEMBRY OFF THE GROUND!!!

9:38- Patriots score as Abbi and I goof around taking photos.

9:53- Wow!!! I don’t think I’ve ever lost my shit like that before! Thirty-five seconds! Thirty-five seconds! Wow. That was really exciting. Everyone was jumping up and down, hugging and high-fiving when the Giants scored. I almost kissed Abbi, then I was like, “Wait, for a football game? That I’m not even PLAYING!?!”