The Invention Of Everything Else 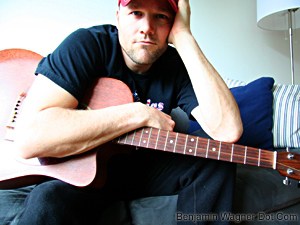 Inspiration is a funny thing; it comes from unusual sources at unusual times.

Tuesday morning was cold and clear. I cued up the “On The Media” podcast on the way to the office. The show featured author Samantha Hunt whose biography of Nicola Tesla, “The Invention of Everything Else,” just hit shelves.

‘The Invention of Everything Else,’ I thought. ‘Good song title.’

As someone approaching mid-life (hey, it’s true), it felt prescient. As someone growing accustomed to life-after-marriage, it felt super-salient. As someone conceding that he’s not going to grow up to be Bono, it felt like a sign. So I typed the phrase into my Blackberry (which has quickly become my short term memory device), and carried on with my day.

Back home twelve hours later, I locked myself into the bedroom, dragged my Martin from the closet for the first time this year, tuned it up and began strumming. What with my ProTools setup dis-assembled and spread throughout the apartment, though, I was outa’ luck when the idea struck. So I called my office, and left a message.

The song I wrote, “To Be At Home,” doesn’t have anything to do with Nicola Tesla at all. And I still haven’t recorded it. But this afternoon, with just a few hours to kill before heading back into work, I put U2’s “Vertigo Live” DVD on the flat screen, cranked the stereo, and restrung my guitar.

As I sat there watching The Edge, I felt the blood return to my face. I actually got choked up as I told Abbi, “I think the music’s coming back.” She smiled, and went back to our taxes. I went into the bedroom, closed the door, and let it wash over me.