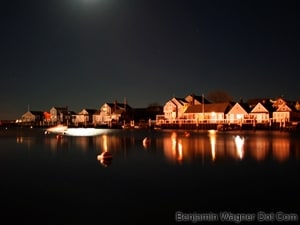 There are three major flight paths outside my window: Newark, LaGuardia, and JFK. With the frequent buzz of tourist helicopters and Hudson River air traffic, the skies above me are constantly crowded with jet engines, propellers, and blinking red lights.

It’s an apt metaphor for New York City, really. Or, for that matter, my brain.

Friday night, though, found Chris and I wandering an empty Nantucket wharf. The water was still. The Steamship Authority’s klieg lights illuminated empty docks. Slips were barren. Cottages were vacant. And nary a dog stirred on the island.

For many, Nantucket conjures images of trophy homes and whale print pants. For me, though, it is this: modest, gray clapboard houses; narrow, sandy roads; and silence: yawning, effortless, limitless silence.

Chris and I were on Nantucket shooting our documentary, “Mister Rogers & Me,” from Friday at ten o’clock to Saturday at two o’clock.

That brief instant in time afforded us a substantive and inspirational morning with Beverly Hall, the photographer who captured one of the island’s most beloved images of local icons Fred Rogers and Millie Jewett, and one other thing: silence.

It wasn’t until our time with Beverly, there in her hand-built home overlooking Hither Creek, that I began to realize just how quiet it was. Sitting there, pouring over photos of her real neighbor, I heard the buzz of an approaching Cape Air Cessna 402.

It was soothing like a distant rush of waves, or a breeze through the branches.

I felt right at home, but more so.