‘Cuz When The Feeling’s Right 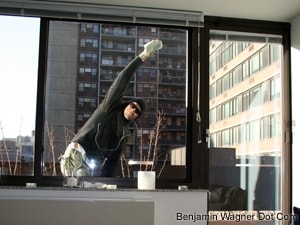 I ran a half marathon yesterday. Abbigail, wisely, sat it out.

Chris and I had returned from our whirlwind trip to Nantucket just twelve-hours prior when we met at the start of the Manhattan Half Marathon behind the Metropolitan Museum of Art.

He, Jen and I were quickly seperated in the 5000+ runner start, so I settled in, reminding myself over and over that this was a long, long run — a distance I hadn’t travelled since the New York City Marathon.

I ran track for exactly one year in high school: eighth grade. I rather unimpressively attempted to compete in the 400, never beating my try-out time of 1:04:00 (Michael Johnson’s current world record, by contrast, stands at 43:18).

I often listened to Bryan Adams “Run To You” on my Walkman cassette player as I stretched (or attempted to stretch; I’m not sure I had any idea what I was doing) before races. Even then (perhaps more so, even) music motivated me. It never added up to any trophies or ribbons, as it were, but it provided a soundtrack and a narrative arch for my runs.

Yesterday’s race was, in fact, soundtrackless save for my attempt to re-write the lyrics to a song of mine called “Here She Comes.”

Abbi finds the lyric “Here she comes / She’s all dressed up / She’s all messed up / I think she’s had enough” a bit depressing. I find them a bit trite, not to mention in unfortunate opposition to the song’s uptempo, almost cheery melody. So, as I ran, I cycled through possible alternatives…

By mile eleven, though, there were neither notes nor lyrics left in my head. I had taken to counting my footfalls in an effort to mask the pain and fatigue. I tallied roughly two thousand, re-zeroed, and did it again.

Afterwards, I hailed a cab home, showered, and collapsed on the couch. My objective was to sit on the couch, read the paper, and listen to NPR. And I did. For a few minutes. Abbi, who is — appropriately — in full-on nesting mode, was hanging frames, arranging flowers, and cleaning out closets. There were dishes to do, clean clothes to be out away, and windows to wash, so I rose, changed “A Prarie Home Companion” to “The Joshua Tree,” and pitched in.

As I washed our big, picture window, looked in on out increasingly warm and welcoming home, and Abbi there snapping a photo of me, I thought of the final steps of my half-marathon. At the end, as I slid towards the outside, digging deep and pushing past slower runners, I imagined Abbi waiting for me at the finish line.

When I was fifteen-year-old, I’m sure I never imagined the finish line looking like this. If you told me I was racing to a bottle of Windex, or a tape measure and dry wall screw, or a petty argument over how to deal with the unwelcome surprise of a metal stud, I’m not even sure I would have understood well-enough to laugh.

One thousand and one races and 1:56:15 later, though, I think I may be beginning to get it.