Quietly Pass Me By 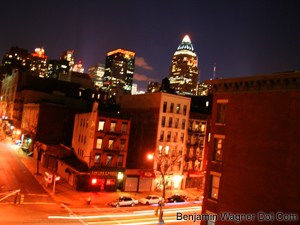 I walked out of the office with a few colleagues tonight.

“If I don’t leave with you guys, I’ll be stuck here another hour.”

Downstairs, Times Square was bustling with scarves, hats and parkas. We walked a few blocks together, pausing to say goodnight at every intersection.

“Where are you going, anyway?”

“Psychopharmacologist,” I replied. “I have three flights in the next thirty-six hours.”

“You could take the NR.”

“Not really,” he replied.

I’m not sure where the day goes.

Mornings begin with a fresh white sheet of 8×10 paper. I start the page with the date on the top right (ex: 1.24.08). Below the date, I list a column of personal assignments (ex: ACK Hotel, Billy Re: LLC, Rx), each denoted with a star. Likewise the left column, though it’s reserved for work assignments (ex: Finish Objective, HP QA, Multiplatform List, Metrics).

I’ve been known to start the whole thing over if I bungle a digit or letter, and I often write over certain words to highlight them, and circle certain assignments to signify major import.

You get the idea.

Every morning, I transfer incomplete items from yesterday’s list (often well-scribbled upon by that point) to today’s. Increasingly, I’m transfering the bulk of the previous day’s list.

The first paragraph on the first page of the first chapter of Douglas Coupland’s new novel, “The Gum Thief,” begins thusly:

A few years ago it dawned on me that everybody past a certain age — regardless of how they look on the outside — pretty much constantly dreams of being able to escape from their lives. They don’t want to be who they are anymore. They want out. This list includes Thurston Howell, Ann-Margaret, the cast members of Rent, Vaclav Havel, space shuttle astronauts and Snuffleupagus. It’s universal.

I like my life. I like my job. I love my wife. But I think Coupland — who’s grandstanding, to be sure — is onto something. It’s what I was writing about yesterday. It’s ambivalence. I think it’s natural. I think it’s ok.

I released my first CD, Bloom, in 1994. The last track is unlisted, but I’ve always called it “Snapshot Summertime.”

And I wonder if I will ever be the type of man
Stand above ourselves outside
Replace the ever after, even if it only exists
In snapshot summertimes gone by

Granted, I was twentythree-years-old when I wrote that lyric, but still, there’s a universal, existential quandry wrapped up in those sophomoric lyrics: How will I ever really know? How will I every truly see?

I’ll never forget getting a card in the mail from a friend of my mother’s after I released the record. It was from her friend Suzanne, a former nun whose spiritual judgement I valued a great deal.

“Trust me, honey,” she wrote, “You don’t want to stand outside yourself.”

I do. We all do, don’t we? Isn’t that what prayer, meditation, and reflection are all about?

Tough to do in Times Square.

If I could only get away a minute…