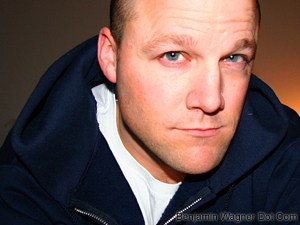 I lead a double life.

My Blackberry lit up with the news of Heath Ledger’s death as my driver pointed his Town Car towards the Lincoln Tunnel. After all these years of covering random news at The MTV, I can’t say that I was surprised. I was sad, though; the guys had a kid.

Anyway, a major news event like a young Hollywood star’s passing usually means a busy day at the office. Add in an afternoon spent in the air, plus the usual day-to-day, awards season (Grammys, Oscars), and an election cycle, and you’ll understand why I didn’t leave the office until just before eight o’clock.

Now, I have a Blackberry Pearl, the kind with a stereo headset that pretty much looks like headphones. So when I walk down, say, Tenth Avenue with my Blackberry tucked in my pocket, well, I pretty much look like I’m talking to myself.

I was talking with my dad.

So I tell my dad about Sundance, coming home, my annual appraisal (which went quite well), and how a few people emailed to tell me I should stop blogging about my job because I’m pretty lucky. And he tells me what he’s eating for dinner, the plans he’s making for his 25th anniversary, and then he strongly encourages me to stop blogging about my, ahem, occupational ambivalence.

“Dad, if a caterpillar was conscious and could write, he too would blog about becoming a butterfly.”

“Or,” he replied, “he’d blog about how grateful he was to be a caterpillar because it enabled him to become a butterfly.”

Obviously, where one’s been and where one is contributes to where one’s going. But here’s the thing. I have a blog. Newly renovated at that. It’s my job to write something daily (more or less). And as fabulous as my life is (that’s a joke), the general story line doesn’t change much. I might summarize it thusly: Dude Trying To Evolve.

Meanwhile (and this is where the “double life” lead comes in), it’s tough to come home after a day like today, and a weekend like this weekend, and then sit down and start transcribing interviews or writing voice over scripts for “Mister Rogers & Me.”

The really weird part about marriage, or, at least, the really part about how I feel now that I’m married — is that all I want to do after work is come home and hang out with Abbi. That may mean dinner at a local restaurant, sushi in front of the flat screen, or something fancier at our dining room table (now with real, live, grown up chairs!).

So really it’s a triple life: work, movie, wife (not in that order, honey, I promise!). Even as I type, I should be scripting the Davy Rothbart segment. But I’m not; I’m blogging. Which means I live a quadruple life. And what happens if you factor in the music!?! And the running!?!?!

I dunno’. Whatever. I’m rambling. This has become one of those posts.

Here’s my point: I really should be working on the film now. Because, in less than 48 hours Chris and I will be in Nantucket. We fly home Saturday night, just in time for a half-marathon Sunday morning. And then back to work. So…

So what’s that whole thing about the butterfly affect anyway?