Sundance 2008: The Mysteries Of Pittsburgh 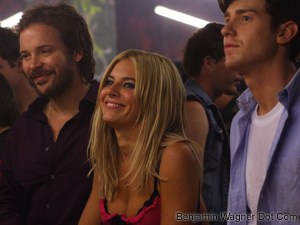 In The Theater: Ten minutes in and I’m crystal clear on the plot. It’s a coming-of-age story about a petty gangster’s son stuck in a bizarre love triangle. Witty diner banter, slow-motion sex scenes, and car chases ensue. Sienna Miller is so gorgeous, and so likeable, I immediately forget all about her and what’s-his-name. Peter Sarsgaard is dashing too, but he’s no Mark the troubled “Garden State” sidekick here; his Cleveland Arning is darker. Newcomer Jon Foster is capable enough, but seems stunned most of the time.

The Verdict: I want to like “Mysteries,” really I do. It’s beautifully shot, and aspires to a real cinematic lyricism. But the comedy is far between, the sex is cliche and kind of embarrassing, the drama is heavy-handed, and Rawson Marshall Thurber’s (do you really need all three names, dude?) direction is ham fisted. Oh well, “The Amazing Adventures of Kavalier & Clay” is due in ’09.