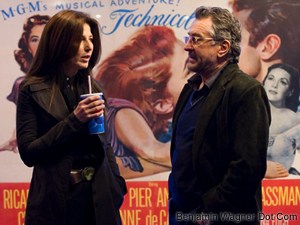 On Line: I’m surrounded by olds. This fact — coupled with one-two punch from the dude who whispered under his breath, “I heard it’s not that good,” and my esteemed colleague Larry Carroll’s minimalist review (“It starts like ‘The Player’ but ends like ‘Simone'”) — does not bode well for the film. Sometimes, though, one’s schedule picks one’s screenings here, not the other way around.

In The Theater: It does not begin well. I’m sandwiched between one guy spooning repulsive smelling soup into his face and another whose parka spills well into my personal space. When the lights go down, though, I’m fascinated by where the guy who brought us “Diner,” “Rain Man” and “Wag The Dog” is taking me, because it doesn’t feel like anywhere he’s been before. Sure, it’s a well-polished Hollywood flick, but it’s punctuated by some sort of reckless, furiously fast-forward abandon.

The Verdict: I like the film. It left me sort of upset (Spoiler Alert: The film repeatedly breaks Hollywood’s cardinal rule by killing the dog — twice!), but in a good way. I have no idea what a Barry Levinson-helmed, inside-baseball black comedy about producers, agents and runaway egos featuring Sean Penn, Robin Wright Penn, and Bruce Willis is doing at Sundance (though I guess Catherine Keener, John Turturro and Stanley Tucci used to be pretty indie). I’m not really sure whether Levinson’s really taking the piss or just goofing around. And I have no idea if it’ll play to anyone under fifty who lives outside of the 90777 area code. But it’s a fine use of 107 minutes, and a heck of an odd ride.