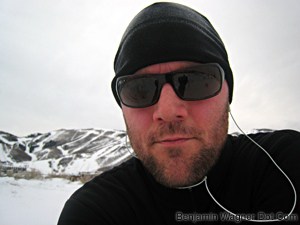 I made any important discovery about myself walking into town just now.

I’m standing on the patio of Treasure Mountain Inn, home base of the anti-Sundance, Slamdance.

The steps of the Inn, here high atop Main Street but within eyesight of The Egyptian Theater (where Sundance was born in 1978) are crowded with what passes in Brooklyn for hipster: bookworm glasses, buffalo plaid flannel, tight sweater, military cap. The crisp mountain air is rife with cigarette smoke.

A few feet away, any IFC camera crew is shooting a standup, one of the hundreds of media outlets beaming these proceedings to the far corners of the Earth. (Do the Maasai know that the buzz on “American Teen” is up to $3M? Feels like it.)

“My ass is wet” the correspondent complains. “And my feet are frozen. Let’s go already!”

Across Main Street, one of Park City’s few kiosks is choked with posters. Young filmmakers armed with staple guns and glossy fliers pin their hopes to the wall.

At the moment, he’s the only person I know — or sort of know — who’s actually premiered a film here. He’s on the list. Hell, he wrote it.

Unfortunately, though, he’s currently scarce. The cold, however, is not.

This morning, I set out to conquer Main before the sun broke the ridgeline. It’s a steep, steady climb, one that even U2’s “Elevation” could scarcely ease. I made it as far as the Kimball Arts Center, about halfway up the hill; my calves were burning, my lungs on fire. I jogged around town, then back towards Eccles Center. Passing an old graveyard just off of Kearns Avenue, I spotted a snow-covered gravel road winding around a tailing hill that I’d spied from the condo. I set out through knee-deep snow.

Atop the hill, I knelt a while and imagined the mountains without the city. For a second, I forgot about guest lists altogether.

Kneeling there in the snow, I remembered a weekend I spent in the San Juan Mountains above Ridgeway, Colorado. I’d retreated into the wild to consider a job offer… from MTV News.

The mountains, it occurred to me then, and again this morning, are for lift lines, at most. At their best, they’re for stillness, and remembering life before cities, high schools, and lists.