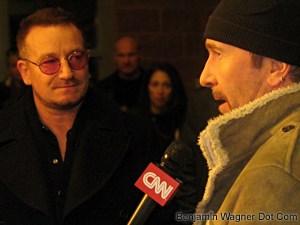 There was nothing between The Edge, Bono and me except Jerry Penacoli.

Incidentally, the Xtra correspondent is not a small man. I’m gonna’ wager 6′ 4″, 225. Nor was he very happy with me at the moment.

The “U23D” red carpet was the single most crowded press line I’ve seen in the last four years of an ever-escalating Sundance Film Festival. And not surprisingly: The World’s Best Band was running it through. This place (heck, this planet) craves celebrity, but this was something else. It was the most-talked about event of the weekend. The paparazzi and television crews were stacked four deep, all jostling and jockeying for position.

Mr. Penacoli spied my mic flag (aka The MTV News Cube), then expressed his displeasure with our proximity to his operation.

“I don’t mean to be a dick,” he said (often an indication to the contrary), “but this just isn’t going to work.”

U2’s publicist, sensing the potential conflagration, bumped WireImage, then placed us fourth in the queue: CNN, E!, Xtra, and me.

Take that, Mr. PM Philadelphia! (Afterwards, when he cordially apologized, I had to resist saying, “I grew up watching you!” instead opting for “No problem; I’m a big fan.”)

Bono and The Edge stepped in front of me. I reintroduced myself to Edge (I’m sure he distinctly recalls the scintillating conversation we shared here in 2006), then shook Bono’s hand.

The proceeding four minutes did, in fact, unfold in some sort of strange, slow motion time warp. I managed to string together a few cohesive questions about the film, stammering through just one fumbled inquiry about the band’s bold stage graphics. Bono and The Edge, though, were unflappable. They offered their sound bites in numerous flavors, sometimes answering the question they knew I meant to ask. They were silly but evasive, substantive but broad, faraway but so close.

The most meaningful exchange, I think, came when I asked them about comments their producers, Daniel Lanois and Brian Eno, had made regarding their forthcoming album.

“Danny is really something of an ancient,” Bono said, launching into an awesome explanation of the virtues of both collaborators.

I felt the corners of my mouth slip into a smile, and — triggered, I think, by his choice of the word “ancients,” and all of the semiotic associations it connotes — thought about the conversation I’d really like to be having with him: God, life, music, meaning. Cameras, microphones, publicists, paparazzi and bodyguards were swirling on the edge of my vision. I stared though his purple Lennon glasses, deep into his gray eyes, and thought to myself, “This man has brought you immeasurable peace and joy.” For a moment, it dawned on me that I was talking with my hero, and the moment was slipping away.

Now, I’ve had the good fortune and luck to interview a fair share of my heroes. Michael Stipe, Aimee Mann, Cameron Crowe, Douglas Coupland. And now Bono and The Edge.

Red carpets, press junkets and even the increasingly rare sit-down interview are really just simple transactions. There is no time for life, truth or beauty. There is no time to connect. We’re not friends. We’re simply executing the business at hand: a new album, a new movie, or a new book.

When I was younger, I promised myself that my heroes would know me as a peer and a contemporary. I would sing with Michael, diagram sentences with Douglas, and talk film with Cameron.

Moments like these, then — no matter how magical — beg the same questions. Who am I? What do I do? What am I here for? Because I’m pretty sure God didn’t put me on this Earth to be a media executive.

Before the flashbulb frenzy of the band’s arrival, the film’s producers walked the carpet. Years ago, I had dinner with one of them, Peter Shapiro, who’s wife, Rebecca, was best friends with an ex-girlfriend of mine. He spotted me tonight and walked over.

In some ways, Peter’s choice of words was the highlight of my night.