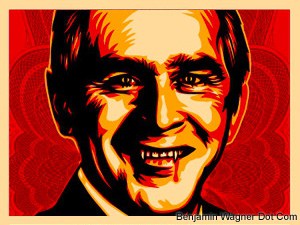 Friday, January 11, 2008, 11:18 PM PST
CAMP ARIFJAN, Kuwait — (AP) President Bush says no decision yet on sending more troops home from Iraq, and reduced force levels will depend on conditions on the ground.

I mentioned this at Monday morning’s news meeting.

“If I were a sixteen-year-old member of our audience, I think I’d want to know that, not only is our president — one who’s left the country about three times in seven years — clinging tenanciously to his war in Iraq, he appears to be escalating on in Iran.”

Now, this is a somewhat difficult story to tell kids. It’s complex. And it’s not exactly in our wheelhouse to begin with. We published 228 Britney Spears articles last year, but only a dozen on Iraq, and one on Iran. Thing is, overwhelming evidence supports that, if they don’t get it from us (or The Daily Show or Onion), they’re not getting it.

You might think that I have the prerogative to just mandate that story. And, come to think of it, I might. But given a lineup full of Ms. Spears, Panic At The Disco, Michael Jackson, R. Kelly, 50 Cent, plus limted resources (our writer staff is small, specialized, and over-taxed), the complexity of the story, and the clock ticking on the time element (it’s no mistake that Bush traveled and made those speeches on the weekend) well, the story fell by the wayside. As it probably did at hundreds of other news outlets.

Maybe I’ll be wrong. Maybe Bush’s clock has run out (I count 359 days left, but I was never much for math). Maybe our citizenry has had it with unjust wars. Maybe we all see right through that ridiculous episode with thosy tiny blue speed boats and that gigantic, gray destroyer.

It’s not like any other wars have begun in some meaningless body of water, like, say, the Gulf of Tonkin.