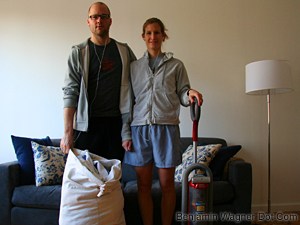 I tell her she doesn’t know how good she’s got it, but she’s not having any of it.

See, I’m a neat guy, but I’m not a clean guy. I figure most guys are neither, and worse are beer-swillin’, couch-squattin’ channel surfers. So, if nothing else, I should be gettin’ some points for neatness. But it doesn’t really work that way. (Anyway, we have different criteria for neatness, but that’s another post.)

Were you to have visited either of my bachelor pads, you’d have observed order on the surface: white walls, right-angled frames, books arranged by height. Open a cupboard, peer under a rug, or pull back a curtain, though, and your senses would be assaulted by dust, lint, and grime.

These sorts of things, not entirely surprisingly, gall my wife. Abbi is both neat and clean.

It’s an interesting thing to be changing my behavior in an effort to be a better teammate. Given my druthers, I’d watch Nova or Frontline on DVR. Left to my own devices, I listening to NPR and blog.

But this marriage thing is my new reality, and calls upon me to step up my game. Accordingly, today I unloaded the dishwasher, took out the trash, ran three loads of laundry and washed the windows (and watched Frontline, and blogged). I don’t relish this new, hyper-vigilance. But I relish being considered a good partner, even if I do mope about it in only half-jest.

Though I must admit, the carpet sure does look nice. And it’s a real treat to be able to get into bed without wiping my feet.