The Rhythm Of The Night 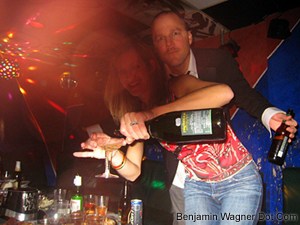 I had a crib sheet of song titles and IDs saved on my Blackberry well before the first guests arrived.

Our pals Chris and Meg Abad put together New Year’s Eve festivities at iBop, a BYOB karaoke joint just off Herald Square. We helped them lug about eighty-seven pounds of chips, dip and booze through the well-crowded streets of Midtownand up the three flights of stairs, then set up the room a bit, thus affording me the chance to a) master the karaoke remote control and b) study all the books and assemble my list of favorites.

The beginning of the night was rife with pregnant pauses and awkward silences. Some needed to be coaxed from the coach. By three o’clock, though, iBop management had to pry the microphones from our sweaty, spinach dip covered fingers as we clustered in groups in front of the giant screen.

I breasted my cards, allowing others to warm up the room before peppering myself into the mix. Chris and Meg set the bar high with their spirited cover of Miami Sound Machine’s “Rhythm Of The Night” opener. Chris’ brother-in-law, George, wowed with his version of Lita Ford’s “Kiss Me Deadly.” I was willingly roped into a somber run through the Stevie Nicks’ chestnut “Leather & Lace” before dropping my standard karaoke go-to, Rick Springfield’s “Jessie’s Girl” and — just as midnight approached — Neil Diamond’s “Sweet Caroline.”

The early hours of 2008 found my wife belting out “Sweet Home Alabama” at the top of her lungs while I randomly increased then decreased the track’s tempo, while reading the house rules for (attempted) comedic affect.

“No swinging the microphone. No jumping on the couch. And please remember, if you’re going to throw up, please do so in the toilet in the bathroom down the hall. Violators will be subject to a $100 fine.”

Many call New Year’s “amatuer night,” and for good reason. Expectations are high. And spirits are flowing. Late in the evening, Chris and Meg were forced to play the role of freshman dance chaperone’s as one of their pals had a wee bit too much Petron and locked himself in said bathroom. (I’m pretty sure they avoided the fine.) We hung with them until his ride came (an amenable cousin from Queens), then bribed a cabby four times his usual rate to usher us (and our leftover tortilla chips) twenty-four blocks uptown.

This morning, I turned melancholy as I choked down a pair of Excedrin with a Gatorade X-Factor Lemon-Lime+Strawberry. Last year was extraordinary. I got engaged, promoted, and married within the span of six months. I travelled to Los Angeles, Las Vegas, Nantucket, Breckenridge, Charleston, Des Moines, Maldives and Dubai. I played a dozen rock shows, released three records, and continued plugging away at my documentary. And I knocked out another set of NYC Marathon and Triathlons.

It was a blast. And sleepless nights and adult excema notwithstanding, I think I balanced work and life, friends and family better than ever.

The year was such an anomaly, I just can’t imagine how ’08 can’t suffer by comparison. Because frankly, I have a lot of work to do.

The wedding process buys a guy a fair dose of latitude at the office. No one’s gonna’ suffer a guy for bein’ a little spacey around his big day. And noe one’s gonna’ dispute the need for a few weeks around one’s honeymoon, for example.

That Get Out Of Jail card has expired, though. And while I’ve never worked harder than I did at The MTV last year, they’re looking to me for big things. In the first eight weeks alone, I have to deal with major initiatives around Sundance, Grammys, All-Star Weekend and The Oscars — which says nothing of the website product development and staffing stuff with which I’m always dealing.

Plus, Chris and I are doing our best to whip together a rough cut of our “Mister Rogers & Me” documentary in time for the Nantucket Film Festival’s] March deadline.

So I won’t front. Is I sit here typing and feel the final moments of my holiday vacation slip away, well, I’m more than a little queasy with anticipation.

Or maybe that’s just the tequila.