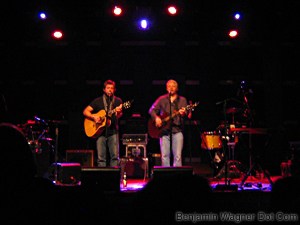 I didn’t know The Olds could lose their shit like this!

I’m in Philly with my pals, The Nadas. I snuck out of work early, hopped on Amtrak, and then cabbed over to World Cafe where the guys just opened up for The Subdudes.

The Subdudes are a talented-enough New Orleans-based quintet. They sound something like The Band meets The Dead meet The Indigo Girls. Awesome, right? Um…

I sat backstage with the guys before the show, catching up, asking about their new record, and generally being excited for them and jealous of them in equal turn. I told Jason how much I’d rather be a part of their Authentic Records empire in Des Moines instead of running MTV News Digital in New York City. He laughed. “Grass is always greener,” he said.

So The Subdudes are into their second encore now, but only after a room full of sixtysomething women stopped checking their watches in the candlelight and started hollerin’ like Pete Townsend was scissor-kicking onstage.

I don’t mean to disparage ’em, I’d just rather hear Mike and Jason play for two hours, but whatever. Watching law partners and bank presidents do their best hippie shake in acid-washed denim tuxedos is entertaining in it’s own right.

By the dull roar of prattle, water cooler talk and idol-but-voluminous gossip competing with my friends’ great songs, though, you’d have though some bush-league acoustic duo — not The Midwest’s Favorite Sons — were onstage.

Thing is, the Iowa-based duo was offering the virgin audience a 25-minute crash course in Nadas’ history, and even previewed a song from new CD (due in March and likely to-be-titled, I’m told, “The Ghost Inside These Halls”):

No mind that the guy running the lights had red lights on during “Blue Lights,” or that the audience was more enthused about each other than The Nadas. The guys were nonplussed by the audience’s apparent apathy. Standing at the bar, hoisting a few gratis pints, one of their buddies said, “Here’s to artistic clout.”