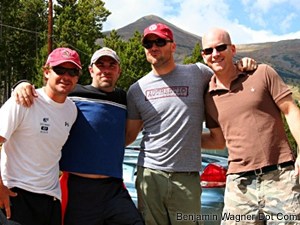 With the possible exception of “strong language” and “excessive flatulence,” I’m pretty sure the MPAA would have bestowed a lowly PG-13 rating upon my bachelor party (dubbed “Benjamin’s Breckenridge Weekend” on the custom beer coozies my father brought) at worst.

Not that we caught the four day adventure on film (though there is some photographic evidence, or had any intention of a theatrical release.

And so it is that my brother, father, and nine of my closest friends and family members descended on a three-level, six-bedroom, six bathroom, two hot tub, one steam room and one pool table chalet some ten thousand feet above and two thousand miles west of New York.

I didn’t simply want to drink beer, play golf and grill steak (though all three were featured on the agenda), I wanted to celebrate the men that (as Mister Rogers would say) “loved me into being.”

Hence the attendee list comprised of the twelve men who have most contributed to the man that I am.

The Father, David Wagner (aka “Big Dave,” “Big Daddy Wags,” “Pops”). Many fathers, when confronted with the geographic divide sometimes the result of custody arrangements, might have simply said “The hell with ’em.” My father, though — already a strong presence as baseball coach, go cart mechanic and frequent chauffeur, and, at the time of The Divorce, younger than I am now — spent his weekend driving three thousand miles round trip between Indianapolis and Philadelphia to be with Chris and me. He has been a constant, collaborative, compassionate presence throughout.

The Brother, Christofer (aka “Chris,” “Wags”). What to say about my elder (key word: elder) brother? He likes to play and to party, but in the middle of it all will turn his head a little bit, squint his eyes, purse his lips and ask the hard questions. He is my unwavering and unflappable best friend.

The Uncles: Stan (aka “Big Stan,” “Fat Boy”) & Jim Wagner (aka “Jimbo”). My father’s elder and younger brothers, respectively, these two have been constant and consistent companions in Wagner Brother Adventures from riding our bikes across Iowa to white water rafting. They’re amiable, loveable, loving, and full of more than just a little bit of good natured shit.

The Rock-N-Roll Cousin, Andrew Wagner (aka “Andy,””Drew”). Drew, the eldest of the Wagner cousins, has been roped into more than one Wagner Brother adventure including an ill-fated attempt to summit New York State’s second highest summit with nothing but three sleeping bags and a six pack of beer. Moreover, though, he is a sweet, sensitive and serious singer/songwriter.

Over-Worked & Under-Slept Corporate Cousin, Brian Bolster. It’s a miracle Bri made our humble affair as he typically spends his time jet setting between Dallas, Dubai and Dusseldorf while tending to his adorable family (who live three blocks north of Abbi and me, but who we’ve seen once in six months).

The Father-In-Law, Richard Keller. Let’s be honest, it took stones for Richard travel 2000 miles into the beer-soaked belly of the beast. If “showing up” is 9/10 of life (and I think it is), he’s got it down.

The Social Chair, Sibby Browne (aka “Sib,” “Sabbo,” “Snib Dog” and many, many more). I met Sibby on in the back of a big yellow school bus on my first day of sixth grade. Chris and I call him “The Third Wagner Brother.” First to the party, last to leave, and most-likely to raise the bar and push the envelope.

The Rogue Agent, James Degus (aka “Dreegs,” “Jimmy Dean”). Perhaps the “high school friend” with whom I share the most in common as an adult, James is the rare Hollywood executive with heart.

The Mad Scientist, John Larkin (aka “Dirt,” “Larks”). An early ally in my more, um, psychadelic experimentation, Jon — a husband of ten years and father of two — has cleaned up nicely (though he’s still prone to foist an American Spirit and shot of Milagro Tequila on an unwitting — and unwaveringly abstenant — victim in the wee hours of a Saturday night), and remained constantly cool.

The Legal Eagle, Rob Perreault (aka “Rockin’ Robbie P”). Though I spent three years in Smokey Junglefrog with his younger brother, the intervening years have found Rob and me strumming guitars and waxing poetic from Aruba to Nashua to Nantucket and beyond.

The Singer/Songwriter, Chris Abad (aka “CJ,” “Ceej”). An absurdly talented musician and a master of the beer pong table, Chris is solid, sensitive, smart and game for anything.

Though the destination seemed inconvenient and odd to many, we picked Breckenridge for good reason. We wanted somewhere naturally beautiful with lots of things to do (or nothing to do, if one so chose). And we wanted somewhere that felt removed from the hustle and bustle of our everyday lives.

Moreover, though, Colorado has always held a special place in my heart. The mountains have awed me since my father first hiked Chris and I into the Holy Cross Wilderness in 1980. Years later, Stan baught me my first microbrew at Breckenridge Brew Pub. The following summer, I moved to Telluride to pump gas, write songs, and mountain bike. Years later, I spent a long weekend at 13,000 feet contemplating a potential future at MTV. Flash forward eleven years…

It’s Friday night. Twelve of the most important dudes in my life — many from completely different places and stages — are jammed around the dinning room table. Sibby’s laughing with Uncle Stan. James is rappin’ with Rob. Richard’s nodding at something Brian just said. And my mind’s kinda blown with all of the odd, asynchronous intersections.

Christofer leans in and says, “This is all for you.”

And while, intellectually — playing golf, shooting pool, simmering in the hot tub — I knew it was all for me, somehow, I felt outside of it all. Maybe it was the elevation, or the juxtaposition of dudes from disperate life phases, or maybe it was the sheer quantity of barley and hops. Whatever it was, I often found myself feeling like a witness or spectator marvelling at the Breakfast Club full of guys.

‘In the simplest terms and most convenient definitions,’ I kept thinking, ‘We’re all brains, athletes, basket cases, criminals and princes.”

Sunday afternoon, with nearly everyone en route to their regularly scheduled lives, Christofer, Sibby and I resolved to summit the peak behind our rental. The mountain lacked a proper hiking trail, so we pointed ourselves straight up the mountain.

Ominous gray clouds began to slither around the peaks to our southwest. Soon, low, rumbling thunder was competitng with the sound of the wind through the aspen, the rattle of my breath, and the thud of my heartbeat.

Like so many times before, the three of us pressed onward making slow, steady, and hard-earned progress by setting periodic goals just beyong our view.

Our calves were burning and lungs were heaving and we stumbled into a warming hut well above the tree line. An icey drizzle was whipping our faces as we posed there some 12,000 feet above it all beaming ear-to-ear.

“Like so many things we’ve done together,” I said as thick black clouds obscured Mount Baldy across the valley, “This was probably a little bit foolhearty.”

“But I’m awefully glad we did it.”

I’m back in New York City now, sitting on my Hell’s Kitchen patio with a pint of Harp and a brand-new New York Magazine. My back is sore from two dozen bungled drives. My quads are burning still from the ascent. But the air here at sea level is sweet and thick like honey.

I am as puzzled as ever as to just exactly who my friends and family loved into being, but I am grateful for each and every one of them, their influence, and their being there.

And I can’t wait for Abbigail to get home.