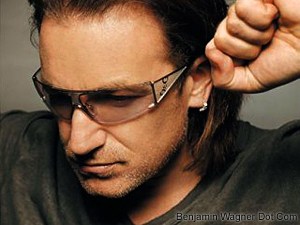 “The true life of a believer,” Bono says, “is one of a longer, more hazardous uphill pilgrimage where you uncover slowly the illumination for your next step.”

Somewhere between running the New Jersey Half Marathon, watching the documentary, “So Goes The Nation,” shopping for furniture and doing two loads of laundry, I finished “Bono: In Conversation.”

The 323 page Q&A between the U2 front man (born Paul David Hewson in Dublin, Ireland, on May 10, 1960) and longtime French music journo, Michka Assayas, occurred via a series of interviews and correspondences as the singer wrapped tracking on the band’s tenth recording, “How To Dismantle An Atomic Bomb.”

The spine of the book had been taunting me from a colleague’s bookshelf for weeks. I finally asked to borrow it recently, and raced through it in a matter of days.

Despite my day job, it’s rare that I come to a band early. I discovered REM just before they graduated from IRS to Warner Bros. (and thus from “college alternative rock” to the mainstream). Likewise, I came to U2 — like most — upon the release of the band’s seminal “The Joshua Tree.” As a sixteen-year-old, it was the height of rock ‘n roll decadence to dance around a raging bonfire on a beach in Mexico singing “In God’s Country” at the top of my lungs.

To some degree, the band music and imagery helped shape my vision of the American West. On my first trip to California as an adult, I bypassed San Francisco, San Diego, and Los Angeles completely, and headed straight to the high desert.

The band’s constant evolution and consistent cultural relevance has cut a wide path through my life. Their music has framed and illuminated my experiences, from that deserted beach to midnight drives on deserted highways (“Stay (Faraway So Close)”). Last winter, I even got to talk songwriting with The Edge.

Through it all, though, it has been Bono’s voice, Bono’s melodies, and Bono’s exploration of The Big Themes — God, Love, Existence — that has kept me in the band. Whether he’s Man of the Year, man of the hour, or just a man, I find him fairly extraordinary. And whether I agree with everything he says or not, he says a lot, and it’s usually pretty articulate, and pretty interesting.

And so the book will return vigorously dog-eared to its rightful owner. Bono is, in short, a quote machine. And many of his finer quotations speak to some of my more current anxieties (see also: “How Not To Disappear”). Of the youth obsession of the genre he says, “We expect our rock stars to set fire to themselves. If they don’t die on a cross, age thirty-three, we want our money back.”

Of the tendency for aging rockers to lose their gift he says:

How did this person who set fire to my imagination end up with no new ideas, and, actually, incapable of their old ones? Here’s my theory: When people are absorbed in the culture, and they’re going out, they’re listening to music, they’re in the clubs, music is just part of their every waking moment, and as a result part of their sleeping times, in their dreams. The life is empty of other lovers. Unless you’re in love with the music, or you stop struggling with it in your dreams, you have other lovers. You dream about moving houses, about whatever ventures your involved in.

He is, of course, 100% correct. I wrote my best songs (“Dear Elizabeth,” “Hollywood Arms”) when I was half-asleep. I recorded my finest work (“Crash Site”, “Almost Home,” “Love & Other Indoor Games”) when music was my one true love. Now, though… well, the verdict is out.

It was a brief passage on Bono’s songwriting process, though, that I found most gratifying.

When U2 songs are written, I don’t write them in English. I write them in what the band calls, “Bongelese.” I just sing melodies and the words form in my mouth, later to be deciphered.

“Bono and I,” I though to myself, “write songs the same way!”

Whether sitting on the basement floor with a yellow legal pad mumbling over Smokey Junglefrog, or pacing my roof with my own ProTool creations in my ear, I have always let the lyrics and the melody find me. The best place to find them, I think, is on the edge between thinking and dreaming. The more I relinquish logic and form, and embrace incoherent, melodic gibberish, the more likely I am to find myself with a rough gem that just requires a bit of logos-centric polish.

Moreover, the more I relinquish myself to dreams, to the unconscious, to that place on the edge of sleep where Rumi says “There are ghosts passing outside the window sill,” the more likely I am to find meaning in things.

Hours later, my laptop strewn across the closet floor, I had captured something; a sliver of my unconscious caught on tape.

Slipping under what? Fear? Old age? The relentlessness of life?

Let what get away? My fianc? My songs? Myself?

Rocket science? No. Grammy winner? Probably not. Evidence that I still have something to say? That my dreams can still light the way?

“Pop lyrics,” Bono says, “are just a rough direction that you sketch for where the listener must think towards.”