Have Heart My Dear 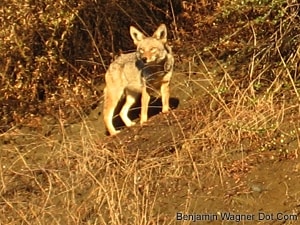 Truth is, given how little I’ve run in the last four months, I probably had no business tackling the Hollywood Hills.

Runyon Canyon, a 130 acre city park, rises over 700 feet between Hollywood Boulevard and Mullholland Drive. My hotel was less than six blocks from the Fuller Avenue entrance. Straight uphill.

Friday morning was crisp and cool, the smog-choked Los Angeles air scrubbed clean from rain. I set out in shorts and a t-shirt, my breath trailing behind me. I ran west on Hollywood, crossed La Brea, turned right on Fuller, and began to climb.

Soon, my calves were burning. My lungs were searing from the frigid air. I overtook hikers and dog walkers — dressed in winter coats and gawking at me incredulously — between gasps. Half-way up the fire road, I spotted a coyote on a tiny patch of sun-dappled hillside.

The vista from high atop the canyon was breathtaking: the Hollywood sign to the east, downtown to the south east, Baldwin Hill (which obscures LAX) eleven miles to the south, and the sparkling Pacific twelve miles to the west.

From above, the vast, chaotic L.A. basin whirled like the workings of a finely tuned wristwatch. From the heights, and for the moment, everything seemed beautiful, and peaceful, and possible.