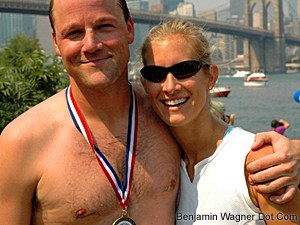 Funny thing happened in the East River between Manhattan and Brooklyn: I got spooked.

I signed up for the inaugural Brooklyn Bridge Swim on something of a lark. I’ve done a dozen triathlons with swims up to a mile, but it’s not like swimming’s my thing. I run, and I ride. Sure, I was on swim team in fifth grade, and I have a serviceable free style. But up until today, I’d swam exactly twice since last summer: the Freedom Tower Aquathon (.5M) the Mister Rogers Memorial Triathlon (.5M). This was 1km (.62M), across the East River’s its unpredictable currents as it spills into New York Harbor.

Impromptu crossings of the East River are an extremely bad idea: Besides the highly dangerous tide-influenced currents that switch directions twice a day, there’s the matter of those thousands of dirty barges. Such a trip should be done only in the company of experts, like the open-water-swimming fiends of the Manhattan Island Foundation. On September 9, they’re expecting about 150 swimmers in the first-ever Brooklyn Bridge Swim from South Street Seaport to Dumbo. It’s a distance of one kilometer, requiring exertion roughly equivalent to running five miles. The event’s start is set for maximum water stillness, at 12:30 P.M., and racers will be accompanied by boats, but anyone who wants to get in the drink must have documented evidence that they’ve completed an open-water swim. Island Foundation open-water vet James Sheehan insists NYC river-swimming is not as grimy an experience as it sounds: “I know everybody cringes when they hear about it,” he says, “and maybe at the beginning by the shore you might see some suspicious things floating by, but once you get out in the middle, it’s clean. Really!”

Waves were seeded by previous performance. I was 94 of 150. (Surely, I thought, they’ve underestimated my swimming greatness — such arrogance, of course, despite exactly zero training.) My wave was fourth. After well over an hour of milling about barefoot, I was wading into the East River. No sooner had my toes settled into the gritty sand than the race director shouted, “3…2…1… GO!”

My initial reaction was laughter. I was swimming under the Brooklyn Bridge! In my first few years in New York, the bridge represented the southern terminus of my reality. Chris and I rode down Broadway often, pausing mid-span to look back over Manhattan, before returning to Hell’s Kitchen. But here I was not just riding halfway, but swimming… all the way. It was exhilarating. I looked back over my shoulder at Wall Street’s smoked glass towers and smiled.

My secondary reaction was, “Well, this is gonna be easy.” There was no current to speak of. There was no chop (certainly nothing like my 2004 bout with the Malibu Triathlon). It was smooth sailing.

And then, just after rounding the bridge’s northern-most brick stanchion, as the course fell into line with the road bed some 135 feet above, the murky East River fell into shadow.

Now, I’ve spent a fair amount of time in open water. I raced in the Hudson River, and Pacific Ocean, and Madaket Sound. I’ve accrued twenty dives in Honduras and Bonaire averaging fifty feet of depth for forty minutes at a time.

Suddenly, though, in the middle of the East River, looking down through these deep, dark green water, I was spooked. First I imagined a great, scaly leviathan rising from the depths to swallow me whole. And then I imagined the drowned souls of the bridge’s construction.

Nothing, really, could distract me from these thoughts. I kept my sights on the southern stanchion, and focused on steadying my stroke. Occasionally, another swimmer and I would bump, then readjust course. Generally, though, I struggled to focus on steadying myself and my stroke, while relishing the sheer absurdity of my pursuit.

Brooklyn came soon enough. Crossing the East River, it would end up, was the least of my challenges, for on the southern shore, the tide was flowing to the sea with vigor. And we were swimming into it. My first inkling that I was in for a difficult finish came when I spotted Abbi on the shore alongside me. I waved, then pushed onward. Five strokes later, though, she was right where I spotted her; I hadn’t moved but a few feet. (Another swimmer later referred to this portion of the race as “the treadmill.”)

Meanwhile, I found myself passing swimmers from the previous wave. This emboldened me to push harder for the orange buoy ahead, and the blue and white ballooned finish beyond.

I counted strokes in the final thousand yards of the race. I forced myself to make ten strides forward before checking my progress. If I inadvertently spotted the finish early, I reset the counter. Soon, the pontoon finish was in sight. I lengthened my stroke, and kicked until my quads burned. Finally, my hands slammed into the aluminum steps. I pulled myself out of the water, heavy like lead, and stumbled across the finish mats in 29:49.

I finished 57th, which the Manhattan Island Foundation will have to take into account next time.