The Edge: I’m Your Man 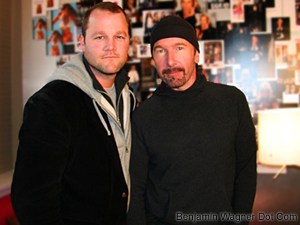 I was in Park City Executive Producing MTV News’ extensive coverage of the Sundance Film Festival. I interviewed The Edge on his involvement in the forthcoming film, “Leonard Cohen: I’m Your Man.” This interview occurred at the Motorola Lounge on Monday morning, January 23, for a program on MTV’s broadband channel, Overdrive, called “Sundance Rock Docs.” The interview is reprinted here for the completist.

BW: Tell me about your introduction to Leonard Cohen.

The Edge: I first discovered Leonard Cohen’s music back in 1978. I was 17-years-old. Courtesy of a friend who played his album with the track “Suzanne” which in those days we were listening to exclusively punk music the softest we got was like Magazine or some of the experimental music. I don’t know quite how he manages to make his way into our circle of friends but he was different. He was considered in some ways welcome in a way that very few artists were. And he stayed with me. That’s the thing about his work: it stays with you. If you become a Leonard Cohen fan you never stop being a Leonard Cohen fan.

BW: His music has real texture, which I hear in your work. Real sonic soundscapes, a richness. And also his lyrics are so substantive. Can you speak about what in his music resonates with you?

The Edge: Well, I think to understand Leonard’s work, you have to understand his very unusual process for writing. Leonard’s writing process is unique. He might spend years, five years, on one song, coming back to it, rewriting it. And its not necessarily a passive just five years, it’s like he will write multiple verses, he will whittle it down until it’s almost a crystalline, pure form of words, some kind of perfect song. But it takes a long time. So if you’re a lyric fan, as I am, when you hear a Leonard Cohen song, it’s like every word is so perfectly placed, and chosen, it just connects in a very deep way. The first time I heard his songs, that was what hit me.

BW: How do you balance that work ethic, that process, with the urgency of the pop music machine: the next album, the next tour. To what degree has that work ethic been an influence, or something you consider when working with U2?

The Edge: Well I suppose where we as a band and as writers would connect with Leonard is in the need to completely separate ourselves from commercial considerations at the moment where you writing a piece of music, or a lyric. Because it’s the only way to keep it pure, in a sense, is just to ignore what’s going on out there. A friend of ours who is a poet once said, “The best way to write is to imagine that you’re dead,” that you’re writing from this unassailable position. And I think Leonard in some ways is the one who does that the most. He’s really cut off. And it’s his own choice. But he doesn’t really do the 21st Century. He is off, out there, looking for little clues, trying to hear the whispers from the angels. And he comes down with these amazing songs from the mountaintop. Every time he releases something, we get very excited.

BW: In the film, you talk about going some place quiet, that you have to find the quietest place to find God, or the muse. Where do you?

The Edge: For me it’s really about just clearing my head from anything that’s of a trivial day to day nature and looking into something that’s timeliness, something that in some ways I’m not even conscious that I know, or understand, but the unconscious things that we know and understand, if you can somehow tap into that. So you can be in the noisiest place, if you can just find your way into that zone, you can write. And sometimes the quietest place is the worst. I think Charles Bukowski said, “Nothing worth a shit was every written in peace and quiet.” I think there’s an element of truth to that. It doesn’t work always for us to be somewhere silent, but you have to somehow eradicate the din of what’s going on out there to be in yourself quiet, to find those things.

BW: As is requisite here.

BW: I would be derelict of my MTV duties if I didn’t ask about progress on the next record.

The Edge: We haven’t really got to the point where we’re thinking seriously about the next record. We’re at that wonderful place where we’re just experimenting, and trying things, just really letting our imaginations go. It’s my favorite phase of making an album because there are no constraints, you just write and explore possibilities. That’s where I am now: loads of possibilities, but nothing concrete.