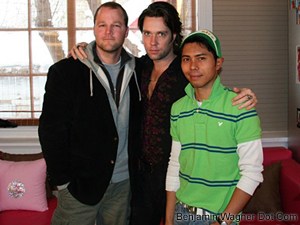 I was in Park City Executive Producing MTV News’ extensive coverage of the Sundance Film Festival. I interviewed Rufus on his involvement in the forthcoming film, “Leonard Cohen: I’m Your Man.” This interview occurred at the Motorola Lounge on Monday morning, January 23, for a program on MTV’s broadband channel, Overdrive, “Sundance Rock Docs.” It is reprinted here for the completist.

BW: Benjamin Wagner, MTV News. So nice to meet you.

BW: I’ve been singing “Movies of Myself” all week.

BW: How’s your Sundance been?

RW: It¹s been great. I’m leaving today, which is good. But it’s been fun to be here.

BW: You talk in the film about growing up in and around what you call “Leonard Cohen world,” I wonder if you could elaborate a little about what it was like, and what you were seeing and hearing and feeling.

RW: I grew up in Montreal. There’s this street there called St. Lawrence Street, which is a very interesting street because on one side is the French side of the city, and on the other side is the English side. I grew up on the English side, and now I have a place on the French. St. Lawrence is actually the old Jewish District, and really where Leonard lives is kind of the heart of the old Montreal Jewish neighborhood, which is apt. And I dunno if he does it on purpose or if it¹s just luck, but everything he does — either where he has his house, or what he’s wearing, or what he¹s cooking for lunch — it always has this sort of double meaning, or this spiritual context. I don¹t think he does it on purpose. But where his lives is a very spiritual center of the city.

BW: Could it be you invest him with that because of who he is?

RW: Perhaps. He has so much weight within him, that you kind of go with it. But I know that Leonard is very humble, he really is. And more than humble, he’s actually very shy. But he¹s also a showman. He knows what he¹s doing. He’s a master of perception in many ways.

BW: Tell me about your first experience with his music.

RW: I really became aware of him during the album I’m Your Man. I always had a little bit of a quirky sense of music, quirky taste. I liked Edith Piaf, and I liked opera, and I liked all of these dead people. And my sister, who was much more contemporary and kind of rocking out in her room and telling everybody to screw off, and was listening to I’m Your Man. She was really into that record. So I really owe it to my sister who got me onto him and out of my dead people zone.

BW: There’s a sonic gravitas and texture to Leonard’s work that I hear, especially, in “Want One.” To what degree did that port over to your creative space?

RW: The thing about Leonard is that he’s greatest attribute is creating a perfect marriage between lyrics and music, neither one ever obliterating the other. And it just makes it so much more effective. That’s what I strive for all the time. In fact Leonard and I have talked many times about songwriting and he is always emphasizing, “We wanna hear the words. We wanna hear the voice.” I think I have a very different style, but still that is the aim: to make it as married as possible.

BW: Well, there’s richness and maturity and a substance to your work that relates.

RW: Well I think we’re both definitely romantics in a certain way, very romantic. We kind of act like Bohemians. We like the café smoky places. So I think there¹s definitely a European style going on.

BW: You got a ton of screen time in the film, performing three songs, including beautiful three-part harmony on “Hallelujah.” Is there a lyrical passage or song you can point to?

RW: For me these days the song that’s really talking to me the most … oh, I can’t remember the name. It’s the one where the light comes through … — “Ring the bells that still can ring / Forget your perfect offering / There is a crack, a crack in everything” — What’s it called? “Anthem,” yeah. And I talk about how everything isn’t perfect, but still you have to try anyway, even if it’s not the way it is. I think that’s a very apt song for today, that we just have to keep trying, even though everything is sort of falling apart.

RW: I’m going into the studio in the spring for my record. I’m also writing an opera. But that’s just a tease for now. I’ll tell you more about that later.