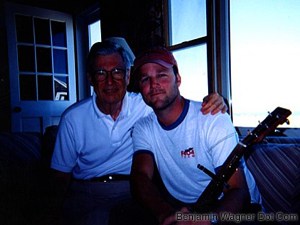 It was the weekend of my 30th birthday, and just a few hours after disembarking the Hyannis Ferry. My cell phone was still chattering with MTV business as I stood on the back porch. The last rays of light were spilling over the horizon. New York City was slipping away from me as I settled into the quiet island night.

Suddenly a familiar voice from the edge of the dune asked, “Is the birthday boy here?” I turned to see Mister Rogers — more slight, perhaps, than I remembered from television, but smiling more broadly than ever — reaching out to shake my hand.

I grew up with him, to be sure. His cardigan and sneakers, though, were mythic abstractions. Like Elvis, or John Lennon, Mister Rogers was an abstraction. Until that late summer evening. See, Mister Rogers was my neighbor in Madaket, Nantucket. He and his wife Joanne summered there in a beautiful clapboard home — The Crooked House, they called it — on Smith’s Point. Meeting him that night would change the course of things for me and small but meaningful ways.

The next day, I walked to The Crooked House for lemonade. I was giddy like a little kid as I trudged with my guitar slung over my shoulder through the sandy street towards his home. He answered the back door wearing glasses, a white golf shirt with a sailboat on it, a pair of slacks and slippers. He was smiling, his eyes like slivers of the brightest, most star-strewn sky you’ve ever seen. We sat in the living room, there in the back overlooking the sea. It was wood paneled, and strewn with photos and artwork: there was Lady Elaine, King Friday, and Trolley.

I sat, mouth agape, and talked a while about New York — he has an apartment one block from mine — my job, plans, and dreams. And then I sang for him. “Summer’s Gone.” I was awfully nervous. Playing for half a dozen people is always more difficult than a hundred. And one of them was a concert pianist, the other was Mister Rogers (an accomplished musician in his own right). I finished, they clapped, we drank lemonade, and smiled. Because Mister Rogers was our neighbor.

That could have been enough. The Rogers had certainly extended their hospitality. But Mister Rogers asked me if I’d like a tour of the house, which of course I did. And so there I was being led around The Crooked House, his magical, intimate little home. There are doorways one must duck through, narrow staircases, and surprise little rooms around each turn. While there was evidence of many summers spent there — fishing rods, foul weather gear, boots and hats — it was a sparse, almost ascetic house. In one small room, next to a twin cot where he snuck the occasional catnap, was a pair of blue Keds resting as if they had just fallen from his feet as he slipped off into Mister Rogers dreams.

Perhaps the most magical part of my tour occurred in his study, out back behind the garage. There was a desk, a computer, and a small piano, all with a view over the pale green grassy dunes to the silverblue sea. He asked me something no one ever asks. “Tell me about your father,” he said. “Your mother doesn’t speak about him.” And I tell him about them divorcing when I was ten, and how it was pretty ugly, and feel like crying right there on the spot.

“That must have been very difficult for you, Benjamin.”

Then he rolled his chair over to the piano and began playing. First, he played the theme from his show: “It’s a beautiful day in the neighborhood,” he sang with a little more swing than on television, smiling. And then he sang “Happy Birthday” to me. Years later, it still seems like a dream.

Outside, Mister Rogers and I stood on the back porch in the Indian summer sun staring out at the water. He asked me about my job at MTV. He said he was concerned about modern pop culture. “You know, Benjamin,” he said, “I feel so strongly that deep and simple is far more essential than shallow and complex.”

The phrase stuck with me. It’s what he stood for, who he was. “Mister Roger’s Neighborhood,” like Mister Roger’s himself, was pure, unadulterated goodness unfettered by extra language, bright colors, or complicated drama. He spoke straight, told the truth, and didn’t worry about being cool or contemporary. He just was. Deep and simple.

The World Trade Center fell just few days after I got back to New York. I was about to release a new CD,”Crash Site,” but — inspired in no small part by his ethos — I repaired to the studio to record a benefit CD instead. I sent him a copy prior to the September 25th release, and invited him to come to the show. He didn’t make it, but when I got home, there was a message on my answering machine from him saying that he’d tried to reach me at the Mercury Lounge, but I was already on stage.

When I returned to Nantucket the following September, I invited Mister Rogers over for birthday cake. Despite a torrential downpour, and two other commitments elsewhere on the island, he came. He was dressed in a navy blue Carhart jumpsuit, and seemed slower and a bit more frail, but he lit up the room nonetheless. All of us, aged 31 to 56, were transformed into smiling, fawning children. He sat next to me on the couch, and watched me open a few gifts: a bright yellow t-shirt with King Friday on the front that read “TGIF,” and a tiny book with a mirror on the front and a ribbon bookmark with Trolley on the end of it entitled, “You Are Special.” Inside he had written “Happy Birthday Benjamin! From your neighbor Fred Rogers.”

Weeks later I was still trying to figure out how to effectively spread the message. What do I know? What can I do? Who would listen?

Since then, I have endeavored to write deep and simple song lyrics. I could not — and would not — have written a song as earnest or as direct as “Stay” (“I love you / I need you / I want you / To stay”) before I met Mister Rogers. And last fall I began a series of paintings of perhaps the deepest and most simple icon there is: the heart. I had set one of the four panel paintings aside to send to him for Christmas, and then Valentine’s Day.

I’d hoped someday soon to shoot documentary on Mister Rogers. I’d envisioned him showing my brother and I around The Crooked House, playing us a song or two in the study, and talking a little bit about love and courage, faith and truth. Chris and I would edit together a documentary as our first feature film. It would be a Good Work, something we both could be proud of. For weeks I’d been carrying the idea around. It would basically tell the about how Mister Rogers changed my life. Like Michael Moore’s participatory documentary before it, I’d call it “Mister Rogers & Me.” I’d I scribbled “Write Mister Rogers” on my To Do List just two days before NPR delivered the news that Mister Rogers had died.

Eulogies are both hurried and artless. And this is surely both. But it is well intentioned, full of love, and full of gratitude. Gratitude that I had just a moment in the life of one of our time’s greatest men. Gratitude that forever more, I have a role model that stood for all that is good, honest, sincere, and kind. Now, all I have left to do before dying is my absolute best to live a deep and simple life, and spread the message far and wide.

Samantha Critchell: Meet Me In The Middle

Mike Joseph: Don’t Give Up